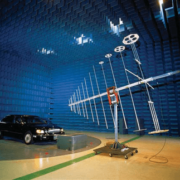 USA-based vehicle manufacturers worldwide market. For this reason, they refer to CISPR and ISO standards in their internal standards, and this applies to other established and developing manufacturers.

The CISPR 25 is typically not used for regulatory purposes, but is commonly used by vehicle manufacturers to ensure good performance of vehicle-mounted receivers. If the radio installed in the vehicle, boat or other device does not perform reliably, consumer satisfaction and consequently product sales may be damaged.

CISPR 12 emitted emission measurements are made at 3-meter or 10-meter test distances. Measurements are normally made in an outdoor test area (OTS) or ALSE in an absorbent coated shield if the ALSE can be correlated with an OTS. Measurements can also be made for boats for water. The correlation of ALSE with an OTS has been a topic of discussion within the group of experts responsible for maintaining CISPR 12 over the past few years. The specification does not currently provide a method for obtaining this correlation. A working group is tasked with developing a method for associating ALSE with OTS; However, this may take more than a few years and we are expecting CISPR 12 then published in newer version.

For test and information

For more detailed information about the tests of EMC, please send an e-mail to marketing-at-egetestcenter.com or fill out the form at https://en.egetestcenter.com/apply-online/ .

egetestcenter.com uses cookies. By continuing to browse the site, you are agreeing to our use of cookies.

We may request cookies to be set on your device. We use cookies to let us know when you visit our websites, how you interact with us, to enrich your user experience, and to customize your relationship with our website.

Click on the different category headings to find out more. You can also change some of your preferences. Note that blocking some types of cookies may impact your experience on our websites and the services we are able to offer.

These cookies are strictly necessary to provide you with services available through our website and to use some of its features.

Because these cookies are strictly necessary to deliver the website, refusing them will have impact how our site functions. You always can block or delete cookies by changing your browser settings and force blocking all cookies on this website. But this will always prompt you to accept/refuse cookies when revisiting our site.

We fully respect if you want to refuse cookies but to avoid asking you again and again kindly allow us to store a cookie for that. You are free to opt out any time or opt in for other cookies to get a better experience. If you refuse cookies we will remove all set cookies in our domain.

We provide you with a list of stored cookies on your computer in our domain so you can check what we stored. Due to security reasons we are not able to show or modify cookies from other domains. You can check these in your browser security settings.

We also use different external services like Google Webfonts, Google Maps, and external Video providers. Since these providers may collect personal data like your IP address we allow you to block them here. Please be aware that this might heavily reduce the functionality and appearance of our site. Changes will take effect once you reload the page.